The Ludlow and District Cage Birds Society, which was formed on 3 March 1950, held its final meeting on Tuesday 26 November at The Squirrel, Ludlow.   It was decided that their remaining funds would be donated to The League of Friends of Ludlow Hospital.

A most welcome cheque for £2096.56 was presented by founder member Cliff Newman to League Chairman Peter Corfield. 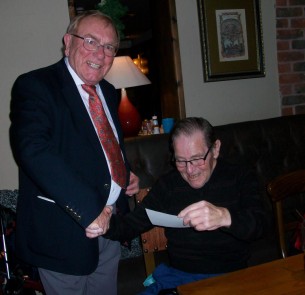 Club President Jim Bishop reminisced about the heyday of the Society when one or two coaches were hired to take members to various venues around Britain to take part in Shows and Exhibitions as well as enjoying a range of holiday and social trips.   “I feel honoured to have been able to follow my hobby to the extent of becoming an International Judge, which took me to America, Rome, Belgium and other European Countries on many occasions” said Jim, adding that “It was never difficult to drum up support for a weekend trip!”

When it became clear that it was becoming difficult to sustain the Society the members were unanimous that any remaining funds should be used to support a local good cause.   “We appreciated the efforts that had gone into saving Ludlow Hospital from closure in 2005/6 as many of us had relied on the services provided there over many years and we also very much supported the work of The League in providing the most up-to-date diagnostic and treatment facilities closer to home”.

Thanking the Society, Peter Corfield outlined how over £640,000 had been raised in order to fund new equipment, and stressed that “It is essential that we keep our Community Hospital and build on the local healthcare provision.   It makes sense that if we use modern equipment and good communications with the acute hospitals then fewer people will have to make the arduous trek to Shrewsbury, Telford or Hereford for routine consultations.   With support from local people, such as we have seen tonight, we feel that we are on the right course and will do all we can to persuade and support the NHS in meeting local needs”.

The League of Friends welcomes new members, details can be seen at www.friendsofludlowhospital.co.uk