The staff of the Ludlow Branch of Nationwide Building Society decided that this year their local charity fundraising should benefit patients at Ludlow Community Hospital.

Branch Manager Victoria Richards explained “Each year we either support a national charity as part of the Nationwide policy or choose to look closer to home, as we did this year.   Many of our customers have commented on the continued progress of The Hospital League of Friends to keep the hospital open and to improve the range of services available locally, and after meeting members of the League Committee we decided unanimously that we would like to help.”   A staff member added “when I fell on the office staircase and broke my hand I went up to the Minor Injuries Unit who quickly got an x-ray and then reset the bones.   It was all done quickly, efficiently and on site, so I was a total convert to Care Closer to Home!   It really is a fantastic service, and right on our doorstep.”

It was unanimously decided that a sponsored exercise bike ride, strategically placed outside the Nationwide Branch in the Bull Ring would be a good start and on Tuesday 28 May the staff took part (see picture) and due to good weather this attracted the attention of many generous supporters. 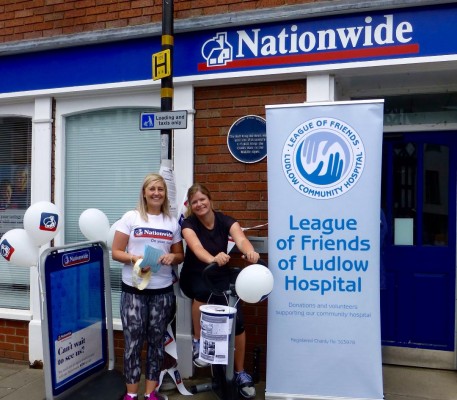 As a second fundraising venture,  the whole team set off on a sponsored walk from Borth to Aberystwyth  on 9th June, raising a total of £504  for The League.

Victoria was then delighted to learn that Nationwide would add match funding, bringing the total donation to £1,004.

Mike Evans, Vice Chairman of The League said “This was a superb example of fund-raising for a local charity – Victoria and her Staff were magnificent.   We are currently investing in equipment to help patients who have memory difficulties or who suffer from dementia and this splendid sum will go towards an additional Reminiscence package to help them build their own memory pages.”

As you may have read in the local press, we were approached by Kelly Hatfield, who owns “Inspire by Beauty” based in the Nail Gallery, Corve Street, when she decided to donate the proceeds of a promotional event to The League. She also threw in any gratuities she received together with raffle ticket sales. Her grand total was £614.04p, a truly remarkable solo achievement. Thanks, Kelly.