DONATE
The League worked with the NHS to improve or renew the local facilities.

League Of Friends Of Ludlow Hospital purchased new electronic profiling beds and airflow mattresses, installed an up-to-date nurse call system and renewed all the TV sets. Following a refurbishment of Dinham Ward the league funded the creation of a relatives’/carers’ room. To prevent renal patients having to travel to Shrewsbury, Telford or Kidderminster funds were raised to install five renal dialysis stations (since raised to six) capable of treating 10 patients each day. The Midwife Led Unit was equipped with a Bilirubinometer to detect jaundice in new born infants and new curtains and other improvements installed in the Unit.

The Minor Injuries Unit was refitted with appropriate storage furniture, a new treatment chair and a Lifepak heart monitor, together with miscellaneous items such as ultrasonic plaster saw. A new kiddies corner was created and equipped to entertain the younger casualties (and their dads!).

The physiotherapy department has been equipped with a home gym for the assessment and treatment of lower limb problems and other equipment has been renewed as necessary. At long last the Unit has its own skeleton on which to demonstrate various ailments.

Outpatient clinics have also benefited from League funds by the creation and equipping of clinic trolleys, consulting rooms and specialist diagnostic equipment, such as ultrasound scanning, visual field test equipment, retinopathy camera – all state of the art. Currently the Hospital hosts 26 outpatient clinics on a regular programme.

League Of Friends Of Ludlow Hospital has joined forces with the Ludlow Assembly Rooms to provide a monthly programme of films specially selected for people living with dementia, memory loss and learning difficulties. These afternoon film shows which include classics such as High Society, Gigi, Oklahoma!, Mary Poppins are presented with low lighting, slightly reduced sound levels and in a warm, enjoyable and comfortable atmosphere for those with dementia, their carers and family. Each performance includes a 20 minute interval with tea and cakes – and carers are admitted free of charge! All performances are open to the general public at a cost of £5.00 a head, including refreshments.

“This was a natural extension of our contributions towards care in the community” said Peter Corfield, League Chairman. “We have supported Community First Responders and funded the provision of Public Access Defibrillators in the Ludlow area, and have also invested in “MyDementia” equipment for Ludlow Hospital, all in the last year at a total cost of over £25,000. Our agreement with Ludlow Assembly Rooms is for three years at a cost of £3,000 which covers the cost of obtaining appropriate films for A Life More Ordinary.”

The x-ray equipment at Ludlow Hospital has been renewed at a cost of £158,000, donated by The Hospital League of Friends. The new installation was agreed by The League after the Shropshire Community Health NHS Trust authorised and completed extensive modernisation of the building which housed the department. 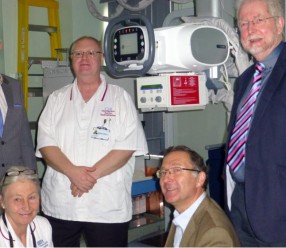