The League of Friends of Ludlow Hospital is grateful for

support and donations in memory of:

Scroll down for previous Notices

"NEW BLOOD"  is needed by the League of Friends of Ludlow Hospital.

The group that has championed health care in Ludlow over the past two decades needs a transfusion of new blood if it is to continue the work into the future. 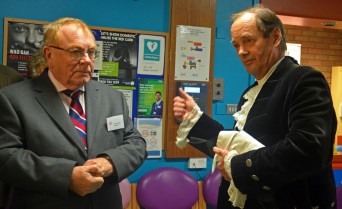 Without the efforts of local volunteers and campaigners Ludlow would not have a hospital of any kind.  Membership of the Ludlow Hospital League of Friends has more than halved and an appeal has been launched for more people to get involved.

The League has been involved in campaigns to keep the hospital open as well as raising and spending hundreds of thousands of pounds on improving facilities** for patients and staff. This has ranged from installing a dialysis unit to treat people with kidney disease locally to investment such as installing televisions on wards. It has been a champion of the importance of local community hospitals and has initiated campaigns to encourage people to use them.

But the work of the League is dependent upon volunteers and the number of people involved is falling dramatically.  The League says that its strength has always been a large, committed and informed membership.  “Over the past 15 years our numbers have dwindled from 1500 to 700 due to natural causes, relocations and other things,” said Peter Corfield, chairman of the League of Friends. “We need to boost membership, and you can help by inviting family and friends to join us and add the weight of their opinion.

"Help us to promote the positive aspects of our Community Hospital – the improved services, the Minor Injuries Unit, X-ray.  Many local residents have the belief that Ludlow Hospital is still under threat – not on our watch it’s not!   Help with our fundraising or publicity events – extra pairs of hands are always most welcome as well as new ideas. We welcome new initiatives and offers of help and there are no onerous or long-term commitments".

“We are re-shaping our Executive Committee and our Trustee Board and new opportunities will arise as a result.”

There has been growing concern that the running of the League of Friends has become too dependent upon a diminishing number of activists who are getting older. Last year the group lost a long serving treasurer who sadly died. Also, Peter Corfield, who has been the Chairman for many years, suffered a period of ill health that put him out of action.

If you'd like to join us, choose a blue box on the right, tell us who you are, and we'll do the rest!

The League Of Friends Of Ludlow Hospital (Charity No. 513978) is a membership organisation which exists to improve the care and comfort of our patients by providing items of equipment and services that may not be readily available from the NHS. Additionally The League provides some volunteer services, such as morning tea/coffee trolley and a trolley shop to the ward (see the Volunteer button for more info.)  Members are kept up to date by regular newsletters which also informs on local NHS developments. Members’ views and opinions are regularly sampled and represented to appropriate NHS authorities.

In 2005/6 Shropshire Primary Care Trust (SCPCT) proposed the closure of Ludlow Community Hospital, a move that was opposed by League Of Friends Of Ludlow Hospital . After organising public meetings, petitions and protest marches, The League, together with South Shropshire District Council, appointed specialist consultants to produce an alternative business case. This indicated that the service proposals by SCPCT were flawed and that an affordable alternative could be contemplated. The League wrote to all residents in South West Shropshire, seeking their views, resulting in 6,700 responses in support of retaining the Hospital. Once the threat of closure was removed, The League worked with the NHS to improve or renew the  facilities.

**    In recent years The League has purchased electronic profiling beds and bedside furniture throughout the hospital, funded the purchase of dialysis equipment, ultrasound scanning, visual field testing equipment, heart monitors and much more.

We gratefully acknowledge the support of

The Ludlow Advertiser in publishing this Appeal.

(The space below is intentionally left blank) .

On a sunny Saturday 13th July the inhabitants of Ludlow and visitors to the town were once again amused (and no doubt surprised!)  to see a group of gallant fundraisers dressed variously as nurses (complete with Orvis' bear) appear in the town centre in the annual BEDPUSH, holding buckets for donations for the League of Friends of Ludlow Hospital. A popular event, the response from the public was generous, as always.

Led by organisers Mark and Alison Hiles, supported by Adam and Mick Griffiths, Ben Whitmarsh and Emily Moseley, the group raised a magnificent total of over £2,320. Mark said afterwards, "the most difficult part of the organising was to convince a bunch of lads to dress up in drag"!   Evidently, Mark is of a very persuasive nature! 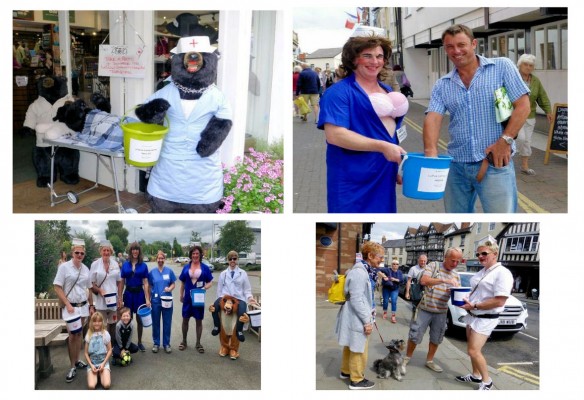 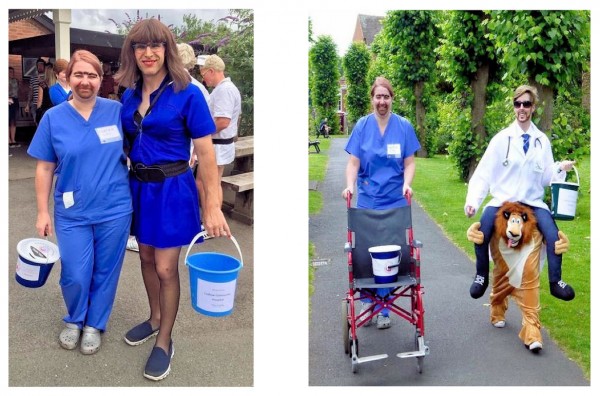 Mike Evans, vice-chairman of the League of Friends, thanking the group and all contributors for their generosity, said "We are delighted that our gallant band of cross-dressed collectors achieved such a wonderful result, it's a most welcome boost to our funds. And a special mention to Orvis for helping to make it such a great day."

Giving service and equipment to supplement the caring and healing work of our local hospital staff for the people of South Shropshire and surrounding areas.